Settlers of Catan game for four

We'd all been out for the day, but were back by 8pm. Richard had to go to a meeting, and Tim was pretty tired, but the rest of us thought we'd like a game of Settlers. Tim said he'd play in a team with me for a while, and perhaps go to bed around 9.

So we set up the four-player version of Catan, and placed our initial pieces. Tim and I realised we couldn't get access to all five resources, but managed one initial settlement in the middle of three good wheat hexes, and the other not too far from the wheat harbour... but Becky (playing red, in Richard's absence) decided to block my access to the wheat harbour. A good move, which I would not have thought of myself. 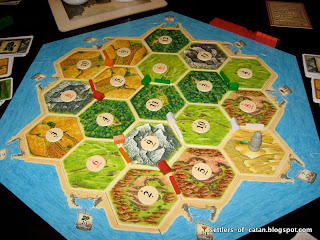 Since she had done that, we felt little compunction in blocking her access to the ore harbour a few moves later. 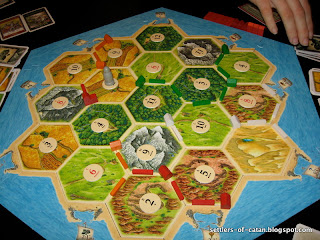 Daniel (playing green) had already taken the longest street card by this stage, and was buying development cards in hope of taking the largest army too.

With Daniel in the game, there were a few extra photos, rather more creative than my usual basic ones of the board. Here was my hand at one point - such as one to delight my 19-month old youngest friend who loves sheep: 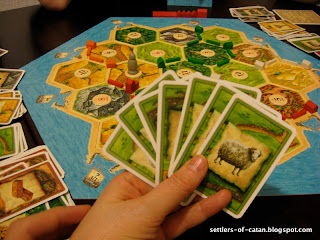 and an unusual one of the robber: 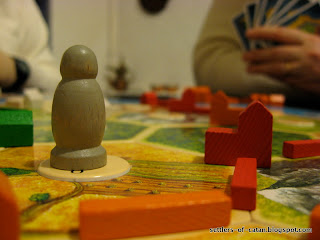 Back to the regular pictures, here's the board after Daniel succeeded in taking the largest army card, putting him in the lead with 8 points. However his lack of access to wheat meant that thereafter he had a hard time doing anything much. 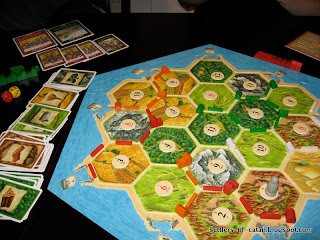 Here's the game a couple of rounds later, by which time Tim and I also had 8 points. With the sheep harbour as well as the ore harbour, I was able to trade advantageously every time it was my turn. 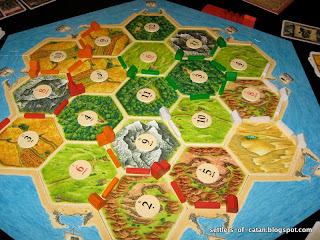 Becky was doing quite well too, but seemed to be hit rather more than average by the 7 being rolled... particularly annoying at times when she had only 8 cards in her hand and had to lose four of them: 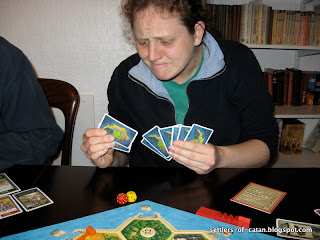 We reached the stage where I had 10 points. plus a hidden victory point card (Tim had gone to bed by this stage). Daniel had eventually managed to build his final settlement, so was on 9 points. Becky and my mother each had 6. I was hoping to build another city, but the resources simply weren't appearing... so I bought another card. It was another victory point, making me the winner - for the first time since we'd come to the UK - with 12. 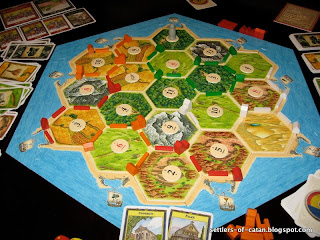 Our usual default Catan game is Cities and Knights. It was quite a steep learning curve before we could relax into it, but now we can chat ... 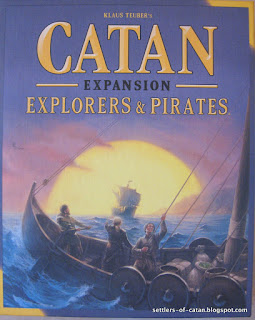